I was inspired to create this post by reading a wonderful piece about a walk in Roman St Albans by Debbie Smyth on travelwithintent, of which much more later. Walking will bulk quite large throughout this post.

St Albans station is a reasonably major station just beyond the official boundary of Greater London. Services to this station are fast and fairly frequent – a non-stop service from St Pancras takes approximately 20 minutes to reach St Albans.

St Albans Abbey station is at the end of a small branch line with not very frequent services (I have travelled it more than once). The other end of the line is at Watford Junction, and there is at present no through connection. Here are some maps for your assistance…

I have made mention of St Albans and its potentialities for greater public transport integration in a number of previous posts:

Tying all these together my future for St Albans’ public transport connections involves:

I start this section with the walk Debbie Smyth talks about in “A Roamin’ Walk through Roman St Albans“. To encourage you to read and comment on Debbie’s splendid post I offer you two pictures and the opening paragraph…

St Alban’s is first recorded as a Celtic British Iron Age settlement, known as Verlamion.  After the Roman conquest of Britain in AD 43, it grew into Verlamium, the third largest town in Roman Britain…

The original of the above picture can be viewed here.

To view the full post (and I reiterate my encouragement of you to do so) click here.

This walk, which I did many years ago when I still lived in London is also well worth a look. I have the route map, a picture showing the whole walk, and individual shots of each double page it occupies… 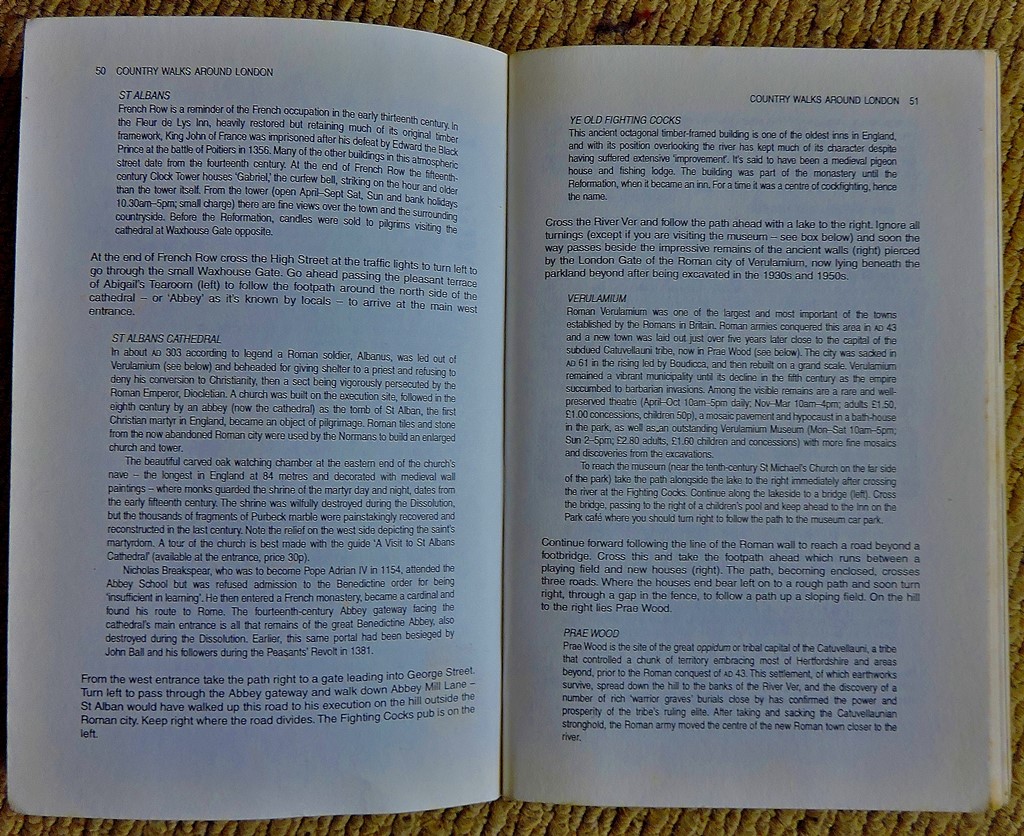 Mention has already been made of St Albans’ significance in Roman times, and this final section adds to that by pointing to the Verulamium Museum as an establishment comfortably walkable from both stations at which you can find out more about this history. Here are some maps showing the walking routes…

To view the original of this map and written instructions, click here.

To view the original of this map and written instructions, click here.

The plan that occurred to me based on these maps (and it would need to very sensitively devised if it were to go ahead) was for an extension from St Albans Abbey to a dedicated station for the Verulamium Museum and then a new terminus at St Albans for an interchange to the main station.

I hope that you have all enjoyed this look at St Albans, a fascinating and historic town on London’s doorstep.